A Pair Of Beauties From Durham Brewery 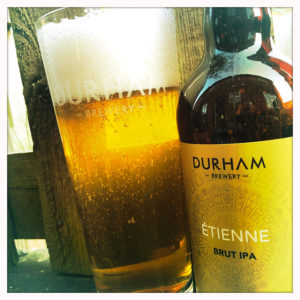 Etienne (6%)
When I asked Durham’s Elly what the added ingredients in this wonderful beer are I was told that if she let me know she’d have to kill me, and so I’m having to take a guess, and that guess is that it’s Earl Grey tea.
Etienne is a Brut IPA that’s as crisp and clean as you could wish for.
The malting is soft and subtle, honey brioche and caramel wafers creating a light and brown sugar sweet body.
The hops, packed with gooseberries and lime leaves, make me think that there’s a load of New Zealand action going on and in the finish there’s a delightfully spicy hit of bergamot and dry pithy green tea that works with the yeast to make the beer feel superbly dry and crisp. 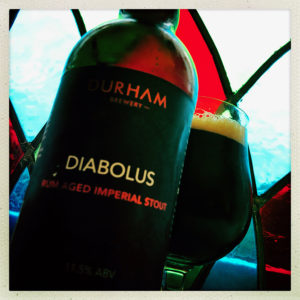 Diabolus (11.5%)
Durham have taken their already magnificent Temptation Imperial Stout and aged it in Oak rum casks.
The result is even better than you might imagine.
Pouring an inky black, the aroma is boozy prunes, all fruity and alcoholic.
There’s a deep dark chocolate cake malt that’s bolstered by damp oak woodiness and a dark and dank background hum.
Any hops involved offer nothing more than a pithy hedgerow and nettle tea, lemon bonbons and lime leaf brightness that bring a sharpness to a beer that, in its finish, comes on like a hyper boozy dandelion and burdock not so soft drink.
Lovely stuff.