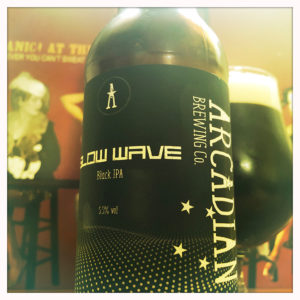 Initially I wasn’t impressed with this, it didn’t seem big enough somehow, but as I settled into it Slow Wave began to grow on me.
It’s a Black IPA full of subtle delights.
Cola and Burdock aromas, round and juicy, drag you into a beer that is, unconventionally for this beer style, soft and subtle.
A treacle tart and caramel muffin malt body makes for a soft and subtle body while the hops bring pine cones and orange marmalade, bitter and sticky, resinous and fruity.
By the last mouthful I wished I was only just getting started.