BrewChap Brewing Concern Something & Nothing (5.4%) 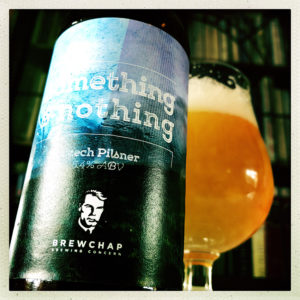 BrewChap has kindly sent me a couple of bottles of his latest creation, a Czech Pilsner.
He’s sent me two to compare and contrast as some of it has been bottle conditioned and some of it has been conditioned in a keg.
I’ve started with the bottle conditioned version and I must say, I’d quite like Ian to get soothing wrong at some point just to prove that he is in fact a human and not a beer brewing godlike robot creature.
This version of Something & Nothing is crisp and bright, sharp at its edges with pithy hedgerow greenery, sweet and creamy in the middle, its malts creating a soft warm honeyed heart, and pepped up by a subtle hit of spicy yeast goodness.
It’s a very good beer, but the finish is ever so slightly too chewy for a Pilsner. 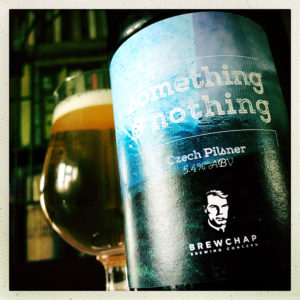 The second version on the other hand, conditioned in a keg gets everything just about right.
All the hoppy goodness is there, the round creamy malts, the lashings of honey and the earthy yeast punch, but with this beer, having no secondary fermentation in the bottle, the finish is long and clean, dry, crisp and bitter, exactly how you would want a Czech Pilsner to end.