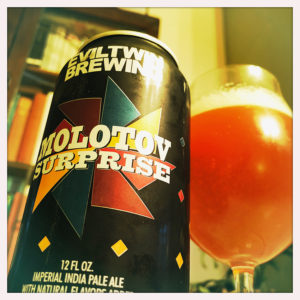 So, Molotov Surprise has a few incarnations, each a massive Imperial IPA, but brewed with different fruits added.
If it didn’t turn my head inside out I’d be quite interested in trying two or three cans of each flavour to see if you can actually tell the difference.
You see, this beer is big and bold and mind numbingly boozy, it definitely has some added fruit in it, but as it’s brutally beaten by the hard smack of booze, it is almost impossible to tell what fruit this is.
There’s a toffee waffle malt, some sticky honey and a hit of green grassy, herbal hops, and then there’s a sharp and tangy, pithy fresh fruit thing that gives yo grapefruit and pineapple, guava and peach, in fact all the fruits that Evil Twin secretly add to each incarnation of the beer.
But I’m damned if I can tell you exactly what this can is full of, though in all honesty I really don’t care as this is one hell of a beer whatever it contains.