BrewChap Brewing Concern If There’s Been A Way To Build It There’ll Be A Way To Destroy It (6.8%) 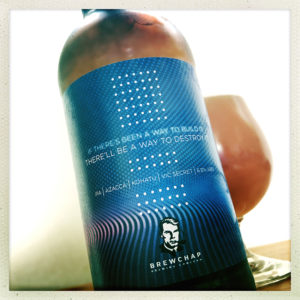 Home brewing hero makes Coeliac friendly beer.
More importantly, and this’ll come as no shock to anyone who has read my other reviews of Ian’s beer, it’s far better than many other professional attempts at a similar style.
To put it simply, if I’d not been told about it I’d never have guessed that this was anything other than a super IPA brewed with Azacca, Kohatu and Vic Secret giving a bit fruit salad bowl of hoppy goodness that’s edged by thorny hedgerow and pithy bracken over a soft and creamy toffee brioche malt body.
And with a brandy snap and apple juice aroma and a warm boozy finish, this is yet another winner from our friend up North.