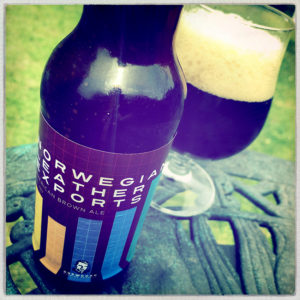 BrewChap has created an American style Brown Ale that looks and feels smooth and, well, leathery.
I’ve been sent two versions to compare and contrast and this the, “CAMRA Approved,” bottle pours with a big fluffy head and a smell that deep and rich and woody.
There’s a splash of coffee alongside the malting, the use of Brown Malt bringing a big sticky molasses, honey and brown bread heart to the beer while the yeast makes everything feel like fresh dough and the hops add orange marmalade and lime leaves.

The, “Evil Keg,” version has all the above but a much lighter feel to the body.
The malting verges more on toffee wafers than molasses, the coffee is still there with its warm woodiness, and there’s a little more fruitiness than wood in the aroma.
As for the hops, the marmalade is still there but the zesty lime leaves take the driving seat in this version.
It’s a really interesting thing, like a remix of an original, all the parts are there but some dialled back and others pulled to the fore.
Which do I prefer?
I don’t have a preference at all, they’re both great, they’re both the same and both different.
Lovely.