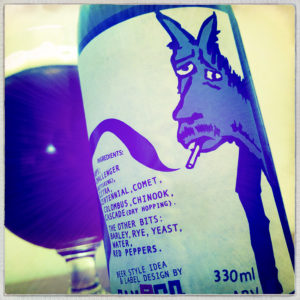 A month or two ago I was chatting with Ian BrewChap and he asked if I’d like to invent a beer for him to brew.
I’ve never been particularly interested in the practical side of brewing beer, but coming up with a recipe and letting someone else do the dirty work seemed like a bit of fun and so I got my thinking cap on.
I decided that a Rye DIPA brewed with red peppers might work, though I had no idea how to make it happen.
And then I spent an evening with a couple of friends in the Two Tailed Lion.
Over the course of some serious drinking Alan and Chris (@titwillars) got involved and we decided that not only should this be a Rye DIPA with red peppers, t it should be brewed using seven hop varieties that begin with the letter ‘C’ if for no other reason than we could call it the Seven Seas Of Rye.
I sent Ian a message telling him of our plan and, instead of deleting me from his phone like a normal person would, he said OK.
And I’m so pleased he did, because what he has created is something really rather super.
Pouring the beer you find a round fruity piquant aroma, sweet and warm and something I’ve never smelled in a beer before.
It verges on a chilli beer but stays soft and sweet and juicy.
Taking a swig there’s that earthy pumpernickel chewiness that I love from a Rye based beer, all bagel and honey, Miso soup and bran flakes, and then a big ways of lime and lemonade, honeysuckle, nettles, redwood and tobacco leaves from the hops.
And alongside all this the red bell peppers add the most remarkably sweet and succulent, lightly spicy fresh red fruitiness.
Far more than I could possibly have imagined they would when I dreamed it up for a laugh.
So I wish I’d had no part in this beer as I love it and don’t want to sound biased towards it, but it really is a tribute to Ian’s skill as a brewer that he used our crazy ideas and made something really very good out of it.
And for those of you who may be interested, the beer is named not after the Queen song, but after a song by the great Medway Dadaist poet Sexton Ming, whose donkey I half inched for the label, because the idea of rye and peppers seemed as mental as some of his remarkable art.