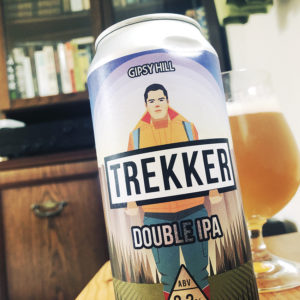 Trekker is a Double IPA that’s heavy with tangy orange marmalade, and that’s something that makes me very happy indeed.
It’s a bright golden beer with a little fuzzy head and an aroma full of peach and mango.
The malting is brown sugar syrup sweet, some honey and doughnuts along with a hint of salty pretzels making for a rich round body with a nice little crunch at its edges, while the hops – Mosaic, Azacca and Ekuanot – provide lashings of lemonade and sherbet, apricot, mango, lychee and orange zest, not to mention the sticky goodness of thick cut marmalade that’s pushed along by a deep warm hit of white rum booziness.
Great stuff.