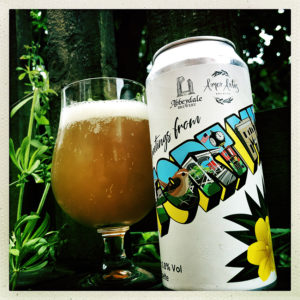 Brewed in collaboration with Amor Arts Of Carolina, this Grisette with Yarrow and Orange Peel is absolutely smashing.
The aroma is a light and summery crackle of spicy honey and tarragon and the beer pours a very inviting warm peach.
From the first mouthful you find that the yarrow is doing its thing, there’s a soft almost liquorice woodiness coupled with a soft and sticky honey sweetness that makes the beer feel chewy and satisfying.
The orange peel adds a zingy zesty freshness and the Cardinal hops bring lots of pithy herbal greenery while the subtle malting, which includes a liberal sprinkling of rice, creates a light yet solid body.
This beer simply sings.
Super.