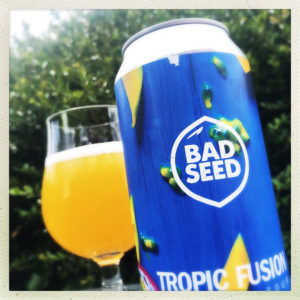 While I’ve still got a real downer on modern sour beer, I have a soft spot for beer that has been kettle soured.
Take this one for example.
The fresh juicy mango and passion fruit give you a soft round fleshy fruit burst, juicy and light, while the malts are a subtle wave of creamy caramel and sugared sponge fingers that give the beer a sweet and chewy background.
The hops are pithy hedgerow greenery and then there’s the unmistakable dry metallic tang that is far more accurately described as tart rather than sour.
It puckers your lips and rolls your tongue in the most refreshingly fun way.
Lovely stuff.