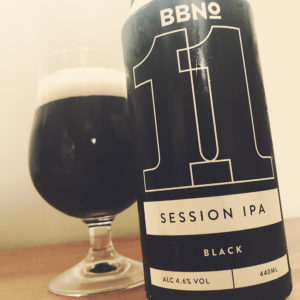 As much as I like BBN this is a really weak offering from them.
A Black Session IPA, it pours an alright mahogany colour but its aroma is equal parts treacle and petroleum jelly.
The malting has chocolate and coffee, woody hazelnuts and a slosh of runny honey, and the hops bring some sherbet lemon and pithy lime leaves, which all sound terrific except for the fact they’re really rather feeble and fade away into a watery abyss before you really get a chance to enjoy them.
Like someone pouring a fabulous drink, wafting it under your nose and then drinking it themselves, it’s a beer that teases you with what it might have been.