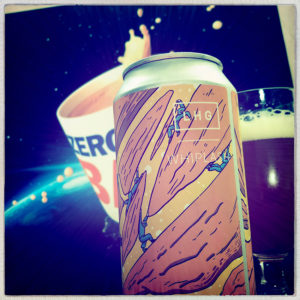 Brewed in collaboration with Whiplash, this is a Rye IPA, and I’m a sucker for a Rye IPA.
The thing is, this is a good IPA but as a Rye fan I’m finding it difficult to find the Rye.
The beer pours a pale gold and smells of honeysuckle and lemon sherbet, and taking a swig you find that the hops – Cryo Citra, Columbus, Simcoe and Idaho 7 – give you a big fresh kiss of lemon and lime, melon and mandarin, along with pithy green foliage and some steely garden herbs.
The malting is good, caramel and honey, waffles and shortcake, but there’s only the merest flicker of anything earthy and, well, Rye based.
I want a Rye based beer to be rich and dirty, but this one isn’t.
It’s still a damned fine IPA, just not the IPA I was hoping for.