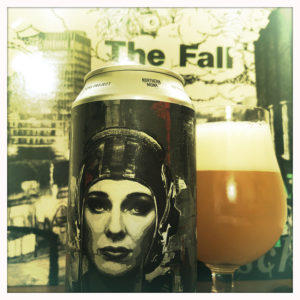 This edition of Northern Monk’s Patrons Project is a Double IPA brewed in collaboration with Other Half, Equilibrium and Tank Petrol, two are Brewers, the other’s a graffiti artist.
But the most important thing to know is that this is a super beer that pours a milky peach colour with a little fuzzy head and a smell that’s heavy with apricots and honeysuckle.
The malting is soft and smooth, with creamy fudge, caramel waffles and honey splashed brioche, while the hops – Mosaic, Citra BBC, Chinook and Simcoe – bring you lots of lime zest and cantaloupe, peaches and orange marmalade all wrapped up in woody rich tobacco leaves that, coupled with the earthy yeast, make for a finish that’s round and sweet and chewy.
Good stuff.