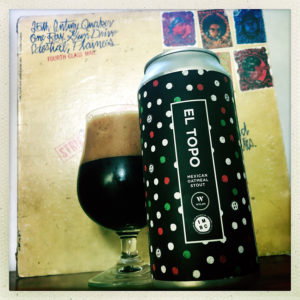 Brewed especially for this year’s IMBC, El Topo is a Mexican Oatmeal Stout.
The thing is it’s just snow here near as good as it promises.
Pouring a deep mahogany purple brown the aroma is all about the fresh lime zest, and sadly that’s exactly where the beer begins and ends.
There may be a solid treacle tart, dark chocolate, honey and praline malt body, and there might also be a swish of herbal leaves and redwood bark from the Simcoe hops, but everything is kicked into touch by the fresh lime zest.
I mean, in itself it’s a pleasant thing, but it takes over, knocking any prickle of heat from the supposed inclusion of smoked chipotle chillis out of the window and leaving the cinnamon and cocoa nibs nowhere to be seen.
And so, in the end, El Topo, taste like nothing more than a decent stout that someone’s accidentally dropped some lime cordial into.