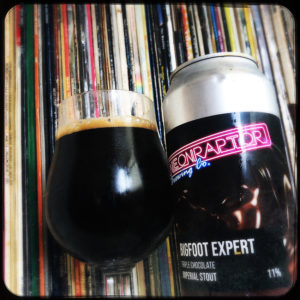 It’s a Sunday evening and I have just sat with my new landlady eating a large roast chicken dinner while we get to know each other a little.
With the food done and the world put to rights I decided to settle down in my room and have a last drink for the evening.
Now, I don’t usually do pudding after a meal, it’s just something I’m not into, but give me this Triple Chocolate Stout after every main course and you’ll quickly change my mind.
This is a mammoth beer.
A mountain of chocolate ice cream, cornets, rum and raisin and a heady hit of brandy.
There’s vanilla and brioche, sticky honey, pecan pie, toffee, coffee and Belgian waffles.
There’s even a little spiky hit of fresh hedgerow greenery from the hops, though I, not sure that they really matter in the grand scheme of this beer with its thick and gloopy, body made up of thirteen (yes, thirteen) malts and shed loads of chocolate.
Pudding?
Don’t mind if I do.