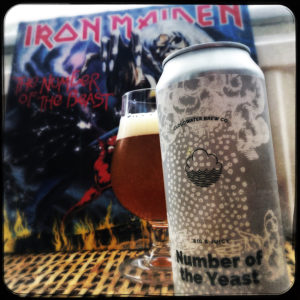 For their 666th Gayle, Cloudwater have brewed a massive Imperial IPA.
It’s so thick and gloopy that, rather than pouring, it slinks out of its can a deep peachy orange with a little fuzzy head.
The smell of the beer is kids’ penny sweets laced with Bourbon, sweet and boozy, warm and sexy., and from the first mouthful you know you’re in for a good ride.
The malting is candy floss and toffee glazed doughnuts, pecan pie and honeyed almonds, and there’s a big earthy fruitiness from the JW Lees yeast – their 5001st generation to be precise, given to Cloudwater to use exclusively here.
The hops are sharp and brittle, nettle leaves and garden herbs, but this is a beer that is greater than the sum of its parts, a beer that needs to simply be enjoyed for the rum doused pineapple chunk and flying saucer, tropical fruit chew and Starburst that it is.
He’ll awaits those who don’t bow down to its beauty.