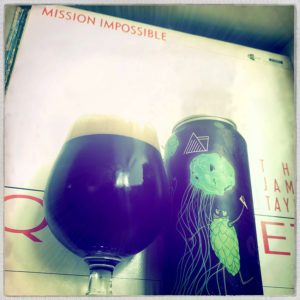 Imagine if you will an Imperial Black Mint Choc Chip Ice Cream IPA.
Picture a day at the sea side and choosing something refreshing to eat as a nice little treat while you walk along the promenade.
Hold in your mind that soft, wrapped wafer cornet with a chocolate layer hiding inside.
Imagine the cold and creamy, bright and fresh mintiness of the bright green blob of ice cream that has just started to roll slowly down onto your fingers as it melts in the heat.
Think about how the little bits of chocolate, the chips if you will, provide an almost crunchy sweet Cacao richness that weirdly stops your little treat becoming overly sickly.
Got all that?
Right.
Now imagine all of that as a drink that’s backed by a big round warm brandy heat and the slap of green pithy nettle leaves, because after all, this is an IPA.
I’ve never tasted anything quite so close to what it states that it is as I am doing while I sip this impossibly clever bit of brewing.
Scoop needs to be tried to be believed.