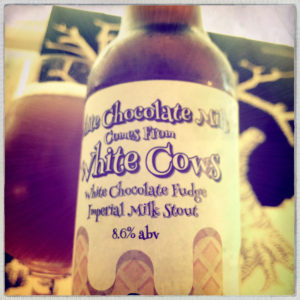 I’m not quite sure where to start with this beer.
It’s a home brew.
It’s the best beer I’ve had in 2019.
Sweet and sticky, thick and creamy, this is a beer that tastes exactly like you’d imagine from the name it’s been given.
Lots and lots of Milky Bars melted down and swirled into ice cream cornets, honey and, oddly but fo the better, fig rolls.
There’s a hint of something pithy and green from the hops, but this beer isn’t about that, it’s about the deep white rum warmth of the alcohol and the sweet buttery fudge of the finish.
This is a beer that, if brewed by ToØl or Cloudwater or somesuch would be the talk of the nattering beer nerds, but because it’s a homebrew I can revel in it being my little secret.