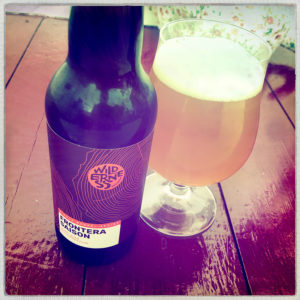 Until I opened this bottle I had no idea what Sherry Flor is.
It turns out that it is a film of yeast that blooms on the surface of wine and is important in Sherry making.
It has been used in this lovely Saison that has been aged for a year in a mixed use Sherry/Whisky barrel.
Brewed with a soft and earthy in-house Saison yeast for an added farmyard silage sweet meatiness, the Saaz hops are brittle hedgerow greenery, nettles and hazel at the end of the season, just before they turn brown, and a squeeze of lemon juice.
The malting is round and chewy, all toffee and shortcake biscuits while a damp woody fug builds in the brown sugar and white wine gooseberry skin finish.