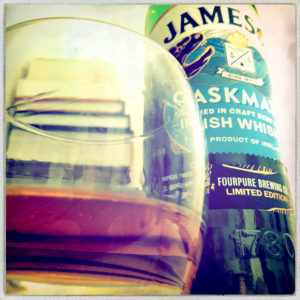 Over the last five or ten years we’ve had, to differing degrees of goodness, beer aged in whiskey barrels, most of it Stouts, but occasionally lighter beer, and on the whole they’ve worked well.
Whether it’s been a big Imperial Stout aged in hefty wooden barrels that have added deep dark damp boozy Brandy notes or big bad Imperial IPA’s that have been given an extra hit of sexiness by letting them rest in Scotch casks.
But now we move into a new world where Whiskey is being laid to rest in beer barrels.
And the thing is, it doesn’t really work.
Modern beer, for all its hop heavy, malt rich loveliness, is still a beautifully subtle drink, a beverage that once enjoyed can be rinsed away with a mouthful of water.
And so one can enhance a beer with hints of Whiskey, but it would seem, at least from this example, that one can’t enhance a Whiskey with hints of beer.
I don’t want you to misunderstand me, this is a very good, very drinkable warm and round, creamy and smooth, vanilla tinged, lightly woody Irish Whiskey, but if I hadn’t been told that it was finished in barrels from Fourpure’s Shapeshifter IPA I’d never have guessed, and I, though I say so myself, have a pretty decent palate for this kind of thing.
And so what you have here is a very good Irish Whiskey with hints of earthy peat, orange marmalade stickiness and a deep chest warming hit of crisp dry booze.
There ma be the faintest hint of something zesty and lemony, but equally it might just be that the bottle has told me to look out for it. This is a very nice drink but I’m not sure that it has anything to do with Craft Beer.

Founder of CAMRGB. Member of The British Guild Of Beer Writers. Leftist bigmouth. Old and grumpy.
View all posts by Simon Williams →
This entry was posted in Uncategorized and tagged Whiskey. Bookmark the permalink.