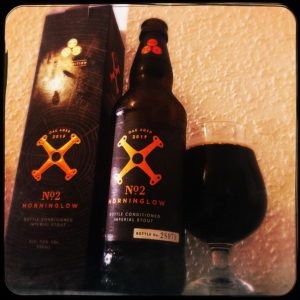 I hoped beyond hope that this Bottle Conditioned Imperial Stout would be good, but it just isn’t.
It’s a weak and watery middle of the road Stout that’s more water than flavour.
Listing the Roasted Barley, Chocolate malt, Malted Oats and Malted Wheat just make the beer feel even more disappointing as what promises in words to be a big round chewy and satisfying beer turns out to be nothing more than Fullers’ Black Cab with an extra hit of booze.
This is a half arsed attempt at an Imperial Stout, it hints at raisins and plums but doesn’t deliver on the warmth and weight that any half decent Imperial Stout would provide.
Nah, you can package your beer however extravagantly you desire, but unless you make something special it’s always going to be disappointingly Marstons.