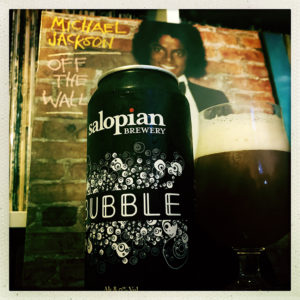 As you probably know, I love Salopian very much, but this beer is all kinds of wrong.
It’s supposedly a NEIPA Triple Hopped with Simcoe, Centennial, Citra and Vic’s Secret.
And if it was that without the awful slick buttery and pear drop, bilious body that at least this can has, it might be decent.
But what I’m staring into the face of is a beer that smells of butterscotch, has a nasty slimy feel and a flavour that’s part apple cores and part white spirit.
If all the cans are like this then this is a beer that should have been destroyed at source and never allowed out into the public for people to spend their hard earned money on.
I poured it away and needed a pint of water to cleanse myself afterwards.