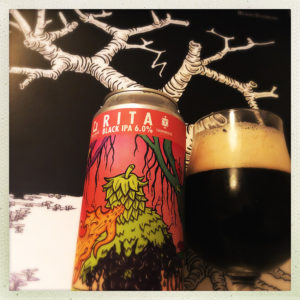 Brewed in collaboration with Thornbridge, RITA is a Black IPA with a lot of attitude.
It pours a deep ruby red rather than the expected purple brown, holds a big fuzzy head and smells of bitter chocolate with an earthy yeast bite.
The body of the beer is a deep dark and frighteningly sexy black coffee, plum jam and burned toast malt creature while the hops – Sorachi Ace, Simcoe, Centennial and Amarillo – bring great big splashes of colour, all bight and zingy lemon peel and lime leaves, gooseberries and green grapes, woody tobacco and sticky orange marmalade.
All this and a finish so sharp you’d swear it’s made of razorblades.
Super stuff.
A beer that pairs perfectly with the searing Avant Metal of Bilbao Syndrome.