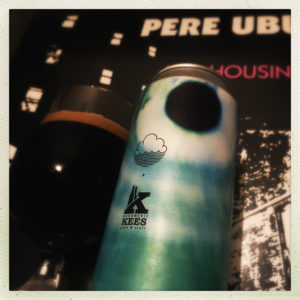 This Imperial Stout brewed in collaboration with Kees, is based on an apple pie and as such has been brewed with apple, cinnamon, all spice and vanilla.
It’s really quite good truth be told, though it took a little while to work its magic on me.
The first few mouthfuls seemed to be all spice with no fruit, and along with the usual coffee and treacle, honey and brown bread of the malting was OK, but nothing special.
But slowly the apple worked its way into the flavour, it’s very subtle but definitely there, and once the sweet warmth of the vanilla kicked in I realised I was in for a treat.
The cinnamon and all spice are the driving flavours, making the beer smell like a kitchen that’s been baked in, while the hit of brandy booze gives the smooth creamy body a big warm hug.
It’s not exactly the beer equivalent of an apple pie, but it’s close enough to make for a deliciously over the top boozy desert.