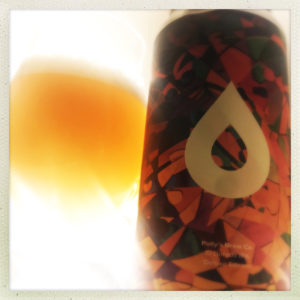 I almost didn’t take this seriously when I read that it is a, “Deluxe Edition.”
I could only think of badly done limited edition CD remixes and the like, stuff to force punters out of even more cash.
But somehow this beer tastes like a deluxe edition of a Polly’s IPA.
I’m not sure how they’ve done it considering the ingredients states El Dorado hops and London Ale III yeast, but the beer feels thick and round and extra juicy, while the aroma s so strong and fresh that the fruity bouquet drifted across the room to me as I was putting a record on.
It’s a papaya, mango and white rum aroma and it finds its way into the beer’s flavour as well.
Lots of super fresh tropical fruit, all fleshy and ripe and made bright with lime zest and sherbet lemon s and a big pithy slap of herbal greenery.
And under all this the yeast bubbles away with an earthy fruitiness all of its own while the malting brings some much needed warm brown sugar sweetness to the great big snog of a finish.
Deluxe indeed.