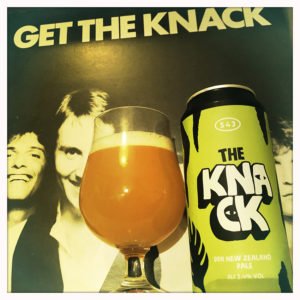 This is a very good beer, a beer brewed with New Zealand hops, a Kiwi Beer as the can states.
Possums were introduced to New Zealand from Australia in the 1800’s as part of the fur trade and quickly became a menace.
Catching them is “a knack,” hence the beer’s name.
But forget the interesting aside of the beer’s title and let’s focus on the beer inside, because this is a big juicy fresh beer, a satisfyingly sharp beer, one of those beers that makes you wish you had more than one.
The malting is soft and round and chewy, with caramel wafers and soft honey brioche, strong enough to create a solid body with just enough sweetness to offset the hop hit.
And what a hit it is, with Wai-iti, Rakau and Ekuanot bringing big washes of gooseberries and green grapes, lime leaves, lemon zest and oranges.
There’s steely herbal leaves as well, metallic and dry they add an extra zip to the long bitter finish.
Very good, and with an added hit of history.

Founder of CAMRGB. Member of The British Guild Of Beer Writers. Leftist bigmouth. Old and grumpy.
View all posts by Simon Williams →
This entry was posted in Uncategorized and tagged Beer, Beer Review, CAMRGB, Can, Canned beer, Drinking, Pale Ale. Bookmark the permalink.