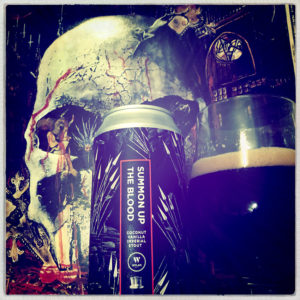 Mental.
Absolutely mental.
Brewed in collaboration with Old Chimneys, this is an Imperial Stout with coconut and bourbon vanilla beans.
The hops here are Fuggles, and they are, in my humble opinion, the quiet hero of the beer.
Yes there’s a massive dark chocolate, honey, toasted brown bread and marshmallow body from the malting, and there’s the super thwack of rich rum steeped raisins.
There’s also the lovely smooth creamy, lightly toasted coconut and the sensuously boozy vanilla ice cream.
But, and it might be just me, it’s the subtle wash of aniseed and woody undergrowth from the Fuggles that binds this all together, makes the beer a single whole of vast depth rather than a multi layered beer of lots of separate parts.
So hail the good old Fuggles, because here it becomes the most important singular point around which all this amazing beery goodness revolves.