A Pair Of Beauties From Buxton Brewery

Buxton’s last Double IPAs of 2019 come as a pair that use the same malt bill but different hops.
I’m sure one could Google which hops are used in each can but in all honesty I can’t be arsed.
I’d rather just tell you this: 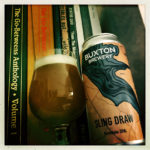 Sling Draw (8%) is a beer with a round and sticky honey waffle, pecan and toffee malt body, some flaky pastry and walnut on the side and a smell that’s big and bold and full of peaches and tobacco.
There’s a boozy underbelly that’s warm and deep, adding a gloopy richness to the beer while the hops are sharp yet fruity, all pine needles and orange marmalade, apricot jam and just a hint of aniseed. 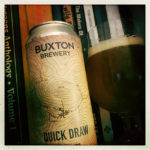 Quick Draw (8%), on the other hand, might begin with that same sweet and sticky, round and gloopy malt body with its hint of nuts and pie, but the hops take it off into somewhere far more woody.
Lots of resinous redwood, rolling tobacco, lime zest and just a little mango flesh.
There’s nowhere near the aroma of Sling Draw , just a light lemon curd waft, but don’t let the lack of smell put you off, as this is all about its big bold bitterness that prickles on your tongue, hides its booze until it’s too late and leaves you with a jaw smackingly dry bitter finish.