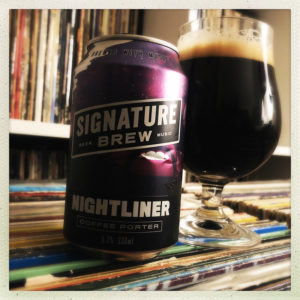 In the world of music a Nightliner is a rather nice tour bus with bunk beds and TV and everything you might need to relax on tour.
The last one I spent any time on was with Fun-Da-Mental whose record label I was managing and for whom I was buying a lot of American Flags to burn.
It’s a strange world on one of these buses.
Ostensibly it’s there to take you from one city to another in relative comfort, allowing you to relax and recharge, but the reality is that you get on it just after finishing a gig and as a result you are spending time confined together and completely wired with the adrenalin of the recent performance.
The result is that you barely spend time in your bunk because you’re just too AWAKE.
So you make coffee and/or drink the remainder of the Rider you’ve rescued from the dressing room of the previous gig.
Signature have tried to capture that and have done pretty well with their attempt.
This is a dry and satisfyingly dark chocolate rich beer with a creamy vanilla body and a great big smack of fruity black coffee, all cherry stones and tobacco leaves.
There’s a little prickle of pithy herbal nettle tea from the hops and a splash of rum and raisin brandy booze in the finish.
Other than smelling of the week old dirty laundry of your band mates, this is a pretty good reconstruction of life on the road.