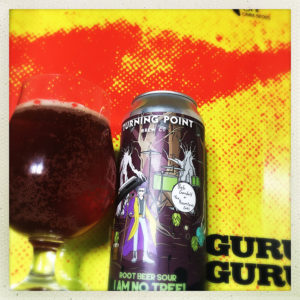 Oh alright then, I like sour beer more than I think.
I’ll admit it, especially after the amazing things I’ve had over the last few weeks.
And this is the star of that particular show.
I Am No Tree is a Root Beer Sour, a beer brewed with ginger, cinnamon, dandelion root, all spice, star anise, vanilla and nutmeg, a beer that carries as much sweetness as it does tartness.
There’s a super soft caramel wafer malt body and a little steely, earthy yeast fug roaming around in the background.
But it’s the combination of all the lovely spices and other bits and bobs that make this beer something really good to drink.
It’s a rich and creamy, sweet and fruity beer that hints at Cola but stays the right side of Root Beer in its deep darkness.
As for the booze, I didn’t notice it was there until it was too late, quietly pushing the flavours at me before reminding me that it can also make me giddy.
Superb brewing.