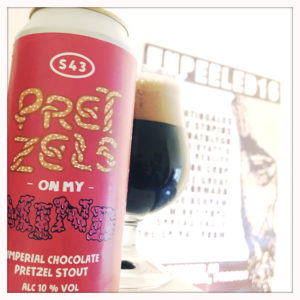 This, boys and girls, is a superb Imperial Stout. It’s a thick and creamy, smooth as a baby’s bum, vanilla ice cream of a Stout.
It’s a Stout with lashings of melted milk chocolate, rum and raisin, brown bread and toasted bagels. A Stout that also boasts a sexy little snatch of green herbal foliage that gives it a bright and keen edge in the finish. It’s a Stout that’s big and boozy, brandy snaps and treacle tart drenched in Cognac.
And all of that is very good indeed.
But this is a Stout that has been brewed with salted pretzels and they slowly build as you drink, bringing with them, at first a light saltiness, but later on that almost burned pasty flavour that only pretzels have.
This, boys and girls, is a superb Imperial Stout.