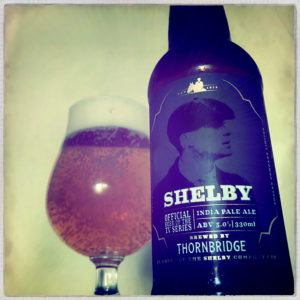 The official beer of the “Peaky Blinders” television series, Shelby is a decent little IPA.
Though more Pale Ale than India Pale Ale, it is reportedly brewed to reflect the beers of the inter-war period that the TV show is set.
There’s a solid malt body of Weetabix and brown bread, honey and caramel, plus a little background saltiness from the yeast.
The hopping brings a lick of lemon zest and some hedgerow greenery which adds a snap of colour to the clean crisp finish.
A beer brewed for Peaky Blinders fans rather than beer fans, this is still worth watching out for when it hits the shelves.