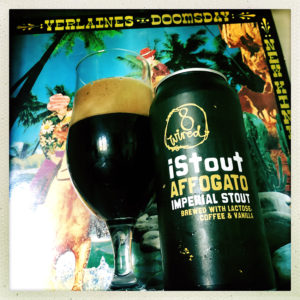 A couple of years ago I wrote a glowing review of 8 Wired’s iStout.
It turns out that they’re making different versions of it.
Perhaps I’m late to the party, but I don’t care as this version, brewed with Lactose, Coffee and Vanilla is a mountain of good things.
It smells like vanilla gelato served with a side of espresso and pours an impenetrable black with a thick cappuccino head.
The malting is fathoms deep, all treacle tart and custard, molasses, honey and lightly salted pancakes.
It’s a thick and gloopy malt body, like happily guzzling a mouthful of tar, and over it there’s a much needed prickle of stinging nettle and garden herb greenery from the hops before the coffee kicks in.
Cherry stones and rolling tobacco, smoky camp fires and pencil shavings are given a rich sweet edge by the vanilla, before you hit the big dark rum booziness of the thick dry finish.
Fabulous.