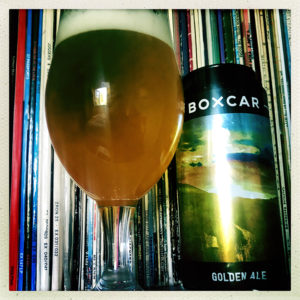 I’m not a big fan of the Golden Ale, mainly because the style brings a lot of baggage about attending beer festivals where every beer but one is a Golden Ale, and every beer but one becomes exactly the same to the point of boredom.
But I’ve managed to steer clear of Golden Ales for some time, and as a result this is decent.
It’s well made and does exactly what a Golden Ale should do.
You get a golden shredded wheat and honey aroma, a malt body of caramel and biscuits, and a light floral and subtly citrus hopping.
Well made, definitely a beer I’d could drink during an evening in a pub (remember those?!?), but not too exciting by itself in the cold light of day.