Drynks Unlimited are a New Start up who have put a lot of money into machinery to remove alcohol from Beer and Cider, and are trying very hard to keep the product feeling and tasting like its alcoholic brethren.
But as much as I like the idea of a beer I can drink and enjoy and then safely drive, these just don’t do it for me.
And here is why. 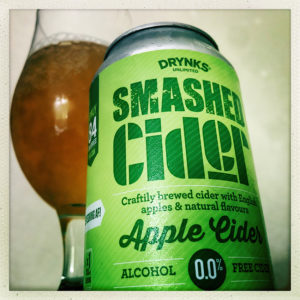 Smashed Cider (0%) isn’t something I’m overly comfortable with writing about because I’m not a Cider drinker and wouldn’t pretend to know anything about it.
But this just tastes like slightly bruised sparkling apple juice.
And maybe that’s what Cider tastes like, but I’m imagining there’d be a bit of warmth and a deepness to the drink that the alcohol would provide, and here there isn’t any.
As it goes, this is a perfectly enjoyable can of “posh pop”, I’m just not convinced about the Cider tag. 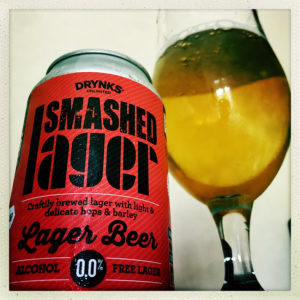 Smashed Lager (0%) is, and I have to be honest because that’s my way, absolutely terrible.
It has a watery malty biscuit smell and absolutely no weight to its body.
Sure, there’s a light biscuit and toffee background and, if you concentrate hard, the ever so subtle snap of herbal hoppy greenery, but the finish is thin and only just carbonated enough, and leaving a rather soapy aftertaste.
More like an attempt at a Beer flavoured fizzy drink than a low ABV Beer, and I’d be interested to know what the “Natural Flavourings” are that the ingredients list. 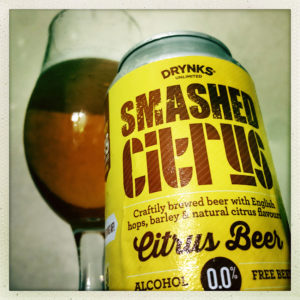 Smashed Citrus (0%) smells like lemon flavourings and tastes like an old fashioned can of Shandy Bass.
Remember Shandy Bass?
It was advertised as, “Made With Real Beer,” but was of course almost entirely Lemonade.
It was a can of pop that me and my friends might occasionally drink and imagine the days when we would be old enough to go to the pub, not realising that what we were drinking was nothing like the beer we watched our fathers drink.
This drink also has added citric acid to help bring out the lemoniness, along with Quillaia extract (as does the Cider), E number 999, it is used for many things, including helping soft drinks go foamy.
It might also be responsible for the soapy mouthfeel.
All that said, Smashed Citrus is my favourite and I might well drink it again, partly because it reminds me of a childhood drink, but it is a very long way from Beer.

Founder of CAMRGB. Member of The British Guild Of Beer Writers. Leftist bigmouth. Old and grumpy.
View all posts by Simon Williams →
This entry was posted in Beer Review, CAMRGB and tagged Low Alcohol Beer, No Alcohol Beer. Bookmark the permalink.