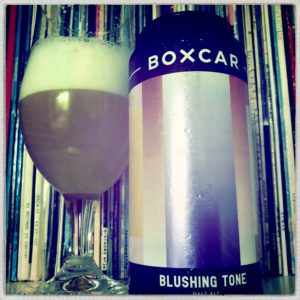 Up until this beer I’ve not been overly impressed by what I’ve tried from Boxcar.
It’s all been well made but a bit, well, standard.
But this little Pale Ale with its enormous floral fruity aroma that drags you down into a drink that’s full of fun, has got me smiling like a mad thing.
The malting is super soft, super smooth, with creamy honeycomb and biscuits, brown sugar syrup and waffles creating a sweet solid base, and alongside this a little prickle of earthy yeast adds a saltiness that’s very pleasing.
The star though is the hopping, masses of orange marmalade and tangerine zest, a touch of fresh rolling tobacco and a bag full of sherbet lemons make for a bright zingy finish that forces you back for another swig, if only to see if there’s yet another layer to find.
Super stuff.