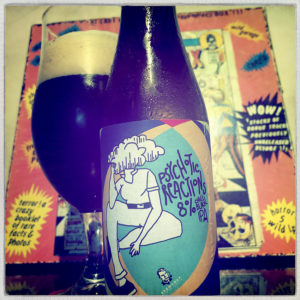 This isn’t really a review.
The reason that it isn’t a review is that I designed this beer and Ian brewed it.
It’s the next instalment in an ongoing CAMRGB/BrewChap thing.
Psychotic Reactions is a Chilli Double Black IPA, and the label was designed by my youngest daughter, Rose (aged 11).
Ian has kindly sent me a bottle of the base DBIPA as well as the chilli spiked version so that I can compare and contrast.
All I can really say is that he is a super home brewer who more often than not puts lots of professional brewers to shame.
The beer does exactly what I was hoping for, lots of liquorice and treacle tart, coffee, pecan pie, honey and pastries, a slap of herbal greenery and some orange marmalade and lemon zest making everything bright, while the rum booze works its magic underneath.
The chilli version adds a spiky and spicy red pepper heat to the mix that builds as you drink, never overwhelming, but equally never letting you go.
Oh, and because this is really all about me, me, ME, I recorded a coer of the song that the beer is named after as well.
Thanks Ian. You ROCK.