Poppyland Brewery: The King Is Dead, Long Live The King

From the moment I first came into contact with Cromer’s Poppyland Brewery, on holiday in North Norfolk, I fell in love.
Martin, the brewer, owner, main man, had been the curator of Cromer Museum and the host of many North Norfolk seaside wanders. He’d been one of the team that had found the first Mammoth in Norfolk’s prehistoric coastline, and he brewed the most adventurous , delicious, mind altering beer.
What’s more, he didn’t brew very much of it, making it seem extra special whenever I got hold of some.
He’d use foraged ingredients and develop his own yeast strains regardless of whether or not local beer drinkers liked it.
I loved that about him, and I loved his beer.
A year or two ago Martin’s health meant that he could no longer keep up the brewery, but instead of just closing it down he found a likeminded local friend to keep Poppyland and its ideas going.
I’ve been waiting to get hold of some of the beer brewed by the new Brewer/Proprietor, Dave Cornell, and it’s been absolutely worth the wait, because the special, magical little brewery that Martin created in the old garage in Cromer seems to be in safe hands.
Look… 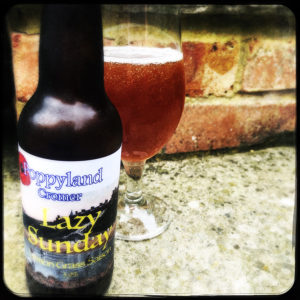 Lazy Sunday (5.9%) is a Lemongrass Saison, a rich and round beer with a solid biscuit and honey, waffle and caramel malt body – the beer uses local malts from Branthill Farm, Wells, just up the road from the brewery.
And the malts really are stunningly good now I’m taking my time to concentrate on them.
Yes, the flavours mentioned above are your standard malt goodness, but here they feel extra rich, extra gooey and chewy, creating a lovely soft sweetness, which is just as much an affirmation of good brewing as it is of lovely produce.
Slinking about over the top of this is a hit of spiky hedgerow hopping, all fresh green undergrowth, nettles and borage, backed up by the rumble of an earthy yeast kick.
The lemongrass sits right at the top of all this, a sharp and fragrant brightness that adds a bright bitterness to the finish. 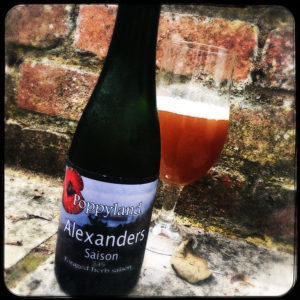 This is a new version of Alexanders Saison (5.4%) which, when I initially wrote about it, was an 8% beast of a beer.
David has tamed it a little, though it’s lost none of its heart.
Again the beer begins with a gorgeous, thick and gloopy, toffee brioche malt heart, while the beer smells of rum baba.
There’s a little rum wafting about in the flavours as well, along with a yeast saltiness that adds even more warmth.
The hopping is once again green and leafy, a lick of liquorice and a snap of nettle tea, while the foraged herbs bring a gentle picnic in a meadow freshness to the sharp crisp finish. 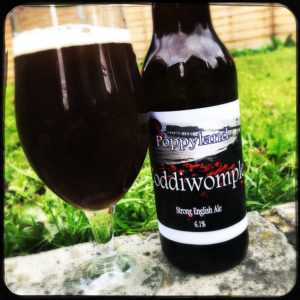 Coddiwomple (6.1%) is a Strong English Ale that I’d like to drink by the bucketful, even if it’d turn my brains to jelly.
To Coddiwonple is to, “travel towards an as yet unknown destination,” something that I will, by the end of this beer, being happily doing.
Imagine a proper ESB with added Brandy, a great big Bitter with a shed load of extra fruity booze.
Got it? That’s this beer.
The malting is fat and full, sticky honey and treacle tart, toffee, brown bread and crunchy biscuits all making for a solid and hearty base.
The hopping is very English, all dandelion and burdock, nettle tea, mown lawns and just a hint of aniseed, all of which is pushed along by a great big smack of chest warming booze that turns this into a beer to settle into your favourite chair with, because once you’re in it, you may not get out until the morning.