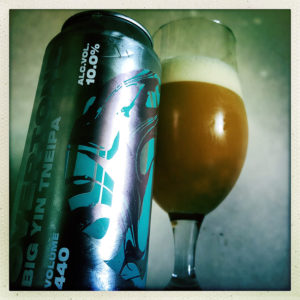 Do you remember those heady days before Magic Rock sold out, when we’d get excited about doing the, “Cannonball Run,” drinking Cannonball, followed by Human Cannonball, followed by Unhuman Cannonball?
We all thought, well many of us did, that Unhuman Cannonball, the Triple IPA was a thing of splendid magic, a beer to wallow in, a beer like no other.
Well, excuse me, but forget all that silly nostalgia, because this is the best Triple IPA I’ve ever had.
It blows the socks off any of the earlier pretender’s works.
Pouring a peachy wallpaper paste gloopy orange, the smell is all gumballs and mango, bubblegum sweetness and tropical fruit freshness.
The malting is heavy and thick, sticky, chewy, but smooth and creamy, with lots of waffles doused in maple syrup, honey biscuits and baguette crusts, while the house yeast blend adds warm and dusty, earthy, lightly spiced apricot stones to the body of the beer.
Then there’s the hops, with Nelson Sauvin bringing pithy gooseberry skins, lime zest and herbs, while the Galaxy and Citra provide lashings of sharp homemade lemonade, hazel leaves, pencil shavings, rolling tobacco and sherbet Dib Dabs.
In the finish the booze builds, chest warming but clean and keen like a crystal clear gin to wash away your sins and have you diving in for the next mouthful.