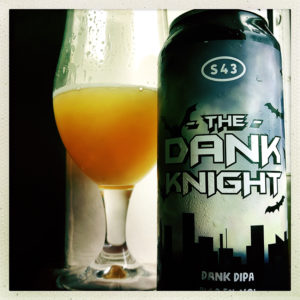 I’m really cross.
Cross with myself for being an eejit.
I popped over to my local Londis wanting to pick up a big IPA and a big Stout.
But I was in a bit of a rush and so I grabbed Big Yin by Overtone and didn’t properly read the label for this beer by S43.
I suppose I guessed it might be a Stout because of its name, but thought no more of it.
Cut to this evening and I’ve just finished Overtone’s amazing Triple NEIPA and, slightly cross eyed, I looked to finish the evening with what I imagined would be 8.5% of Stouty goodness.
But I picked up the wrong can.
There was definitely a big S43 Coffee, Hazelnut Milk Stout on the shelf because I read the label and thought it looked good.
But what I picked up instead was a DIPA.
A very good DIPA as it goes, crammed with peaches and vanilla pods, caramel wafers, honey, digestives and lemon curd, garden herbs, orange marmalade, lime zest and rolling tobacco.
The Dank Knight is a super beer, it’s just not the beer I wanted.