A New Duo From Signature Brew 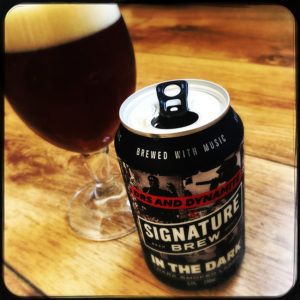 In The Dark (5.1%)
Rauchbier isn’t everyone’s cup of tea, but I’ll tell you this for nothing.
If you like a Rauchbier then hunt this little can of joy down, sit back and revel in a beautifully balanced Dark Smoked Lager.
The beer smells of Frazzles and chocolate and sits a deep ruby red in my glass.
There’s an initial hit of thick and chewy toffee which grows into a gloopy dark chocolate, runny honey, treacle tart and ice cream cornets as the malts sit front and centre.
The hops drift in and out, giving a sharp and pithy smack of herbal hedgerow and bitter orange marmalade.
And all the while the smoke of the malts grows, bringing camp fires and bacon, honeycomb and S’mores.
This was brewed in collaboration with Drs & Dynamite.
Super stuff. 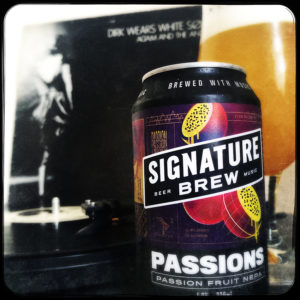 Passions (5%)
The ingredients printed on the can of this rather good little NEIPA doesn’t list Passion Fruit puree, but the beer really tastes like it has had an involvement.
Pouring a light cloudy peach colour, the smell is a lightly musty apricot and honey sweet fruitiness.
There’s a decent caramel and wafer biscuit, bread crust ad toffee malt body, and a little earthy peach stone fruitiness from the yeast.
The hops bring mandarin and lychee, a hint of leek and a splash of lemon juice before the lightly tangy but delightfully fruity passion fruit flavours start to work their way up through the beer, eventually taking over by the refreshingly fruit juice laced finish.