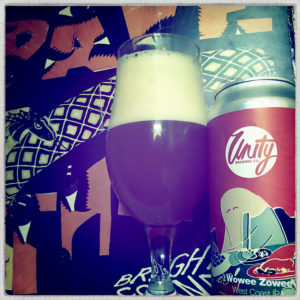 Wowsers, this takes me back.
Wowee Zowee, named after an album by Pavement, is a classic West Coast IPA, a style that over the last year or two has lost favour to NEIPAs and the like.
The result is that this beer tastes like a blast from the past and equally big and fresh and new.
It’s a beer that has transported me back to the heady days of the initial CAMRGB “fight” to enjoy beer for beer’s sake, the wide eyed excitement at a beer that simply tastes good however it is presented.
Wowee Zowee has a lovely spun sugar, candy cane, caramel waffle malt body, light and sweet, but sticky enough to hold its own behind the hops.
And what hops they are.
A classic blend of Simcoe, Centennial and Mosaic, combines to bring you zingy fresh lemon and lime zest, green and pithy garden herbs, woody rolling tobacco, a blob of orange marmalade and the tongue tingling fizz of sherbet.
This is a beer at once reminding you of past glories and tasting for all the world like the future.
Simply put, I’m rattled by the rush.