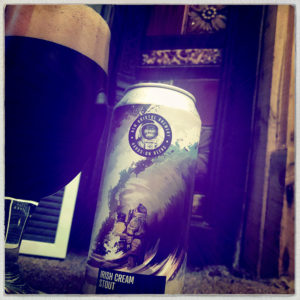 This is almost brilliant.
Almost.
You see, it has a flaw.
It begins with the lovely warm aroma of creamy coffee and whiskey, and those smells draw you down into your glass where you find lots of the same.
There’s coffee and praline, thick cream, dark chocolate, whiskey and treacle tart.
The body is a warm pastry, buttery and thick, chewy and mouth filling.
All good so far, right?
The problem is that the beer doesn’t stop there.
Where you want to end on a sweet and sticky vanilla milkiness, to be treated to a pudding of a beer, instead there’s a rather harsh (at least in this context) bitterness, and it has far too big a herbal slap to really fit in with everything else going on, and to make matters worse this comes from East Kent Golding, a hop variety that without all the smooth chocolate and vanilla around it would generally be a rather subtle affair.
And therein lies the flaw of what is an almost brilliant beer – Too many hops.
And I NEVER thought I’d find myself saying that.