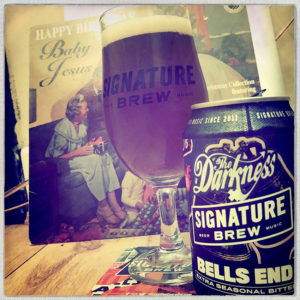 Christmas is a time for Tradition, enjoying things that have always been, nostalgia.
And so Signature have teamed up with The Darkness to brew their 2020 Christmas beer.
It’s an ESB, and Extra Special Bitter with a comedy Christmas name, and it’s really good.
Pouring conker brown, there’s a toffee apple and brown bread aroma, and these dark autumnal delights pop up in the flavour.
As you take your first swig you find a lovely malt body that’s full of bread crusts and honey, waffles, toffee and Golden Syrup.
The hops bring crunchy red autumnal leaves, nettle tea and a lick of lemonade.
Bells End is a warm round comfortable beer to drink on a dark damp evening.
It’s a beer named by The Darkness and as such is rather silly.
I remember many years ago, a dear friend of mine who used to promote concerts at the sadly now closed Buffalo Bar in Islington, telling me he was putting on a metal band and that they were very funny, and were going to be huge.
It was, I believe, their first gig and I didn’t go because I had other plans.
The band was The Darkness and my friend was right, they were funny and they were huge.
Happy bloody Christmas.