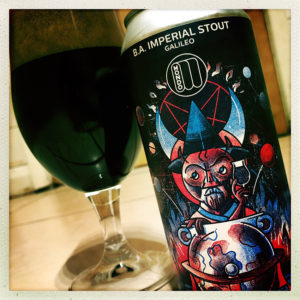 If you fancy giving yourself a special Christmas treat then look no further than this Imperial Stout that has been brewed in collaboration with Heretic of the USA and aged in Bourbon barrels.
Pouring an inky black with a foaming hot chocolate head, the smell is whisky drenched prune compote, it’s a sweet, fruity, boozy aroma that invites you to dive in and fin out more.
And once you do jump in you find a malt body that’s rich with dark chocolate, vanilla ice cream cones, coffee and toffee, treacle tart in a well baked shortcrust pasty case, black cherries and damsons, the Lactose adding an extra sheen of smooth sweetness.
The hopping, Fuggles of all things, works brilliantly, its liquorice root, herbal hedgerow and nettle stings prickling away to bring some much needed brightness, as the eighteen months sitting in Bourbon Barrels slowly ramps up through the drink, adding a damp woodiness, a rich raisin rum warmth and the hit of booze that’ll make you remember that evening that you drank a bottle of single malt to yourself and, after two days of insobriety, wondered if you’d ever be sober again.
Or is that just me?
But what I love the most about this beer is what happens in the finish.
Because all the above grows and spreads across your face but calms down right at the end of the beer, leaving you with a delightfully soft Cadbury’s Flake chocolate stickiness just before you head back for another mouthful.