Some time ago I was sent some beer by a home brewer based on the South Coast.
It was very good and I told him so.
That same home brewer is now brewing under the name UnBarred with a Brewhouse and Tap Room based in Brighton.
Initially I was going to do a short interview, but on working my through the range I was sent, I have decided to let the beer speak for itself.
If you want to find out more about UnBarred their website has lots of information.
So, here goes… 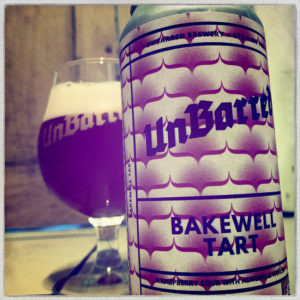 Bakewell Tart (6.5%) is lovely. It smells and tastes of Bakewell Tart, simple as that.
Pouring a light peachy pink the smell is raspberry, vanilla, almonds and pastry, and this is replicated in the flavour as you drink.
There’s a malt body that provides shortcrust pastry, a dab of honey and lots of sweet caramel, and just the softest hint of lemony citrus form the hops. But it’s the additions of vanilla, almonds and raspberries that make this a light and bright dessert of a beer. The yeast – Philly Sour if you were wondering – pops up in the finish with a dry crisp tartness that makes the beer end with a fresh zing as well as allowing the name of the beer to contain a little play on words. 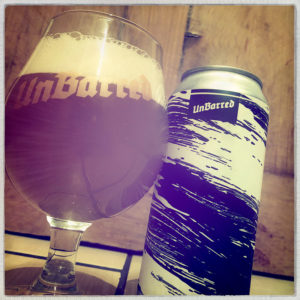 Azacca, Mosaic, Simcoe & Vic Secret NEIPA (7%) tells you exactly what to expect and it doesn’t disappoint.
This is a superb NEIPA with a deep and creamy, smooth and rich malt body that’s full of honey and brioche, freshly toasted waffles and sugar sweet candy canes
The yeast adds its particular NEIPA thing, peach stones and slightly salty fuzzy apricot bringing an extra layer of flavour, while the four hops team up to delight you with their sherbet lemon and sticky orange marmalade, freshly torn garden herbs, gala melon and nettles, rolling tobacco and pithy redwood bark.
The booze cuts in towards the finish, pushing everything along with its clean gin warmth, leaving you with a finish that’s equally soft and sweet, crisp and dry. 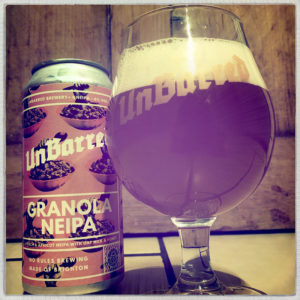 Granola NEIPA (6%) is my beer of 2020. It is a thing of rare complexity, a thing of beery beauty.
UnBarred have taken the NEIPA style, all hazy and golden, with an earthy fruit yeast, and brilliantly added oat milk and honey, peaches and apricots.
The result is a great big soft IPA with a fluffy vanilla ice cream body, waffles and cornets, pancakes and brioche, it’s a beer that feels round and chewy and satisfying.
But then there’s the added ice cream smoothness of the oat milk, the sticky warm roundness of the honey and the fruity goodness of the peaches and apricots that manage to get nowhere near acidic and sour, but instead taste like some delicious boozy children’s sweetie.
The El Dorado and Amarillo hops bring a punch of freshly cut herbal leaves and a rolling tobacco, but it’s the way that the pat milk, peach and apricot lead you down through the beer, from the aroma to the finish that makes this an extraordinary bit of brewing. 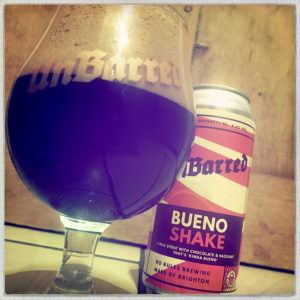 Bueno Shake (6.4%) is a Milk Stout with chocolate and hazelnuts that brings to mind exactly what the name suggests.
This is a boozy liquid Kinder Bueno.
The malting is soft sugary wafers, light and crispy, like those posh waffley style ice cream cones, and the hops – Cascade and Magnum – sit quietly in the background with a light wash of damp woodland greenery and just a little orange peel.
And then there’s the chocolate and hazelnuts that, alongside the lactose, make the beer not only smell like you’ve just unwrapped a child’s treat, it tastes so much like it that yu expect a little toy to play with after you’ve finished.
I drank this while eating a Custard Tart and it was the perfect accompaniment.
Lovely. 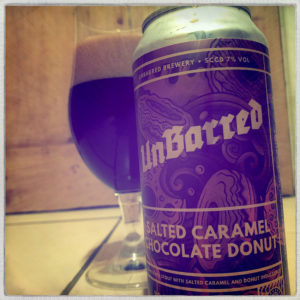 Salted Caramel Chocolate Donut (7%) is pretty much self explanatory.
This deep dark beer smells of freshly fried sugared donuts, all sweetened sticky dough as its cappuccino head slithers down your glass.
The malting is big and round and chewy, with treacle tart and rum baba’s creating a rich honey and vanilla ice cream and caramel heart, while the salt prickles away in the background.
There’s a super soft swish of something melon-y from the hops, adding a little juicy aside, a little freshness to what is a delicious pudding of a beer.
Deep dark chocolate, soft smooth caramel and pinch of salt and a lot of chewy freshly cooked dough makes this a beer that does exactly what it tells you it is going to do. 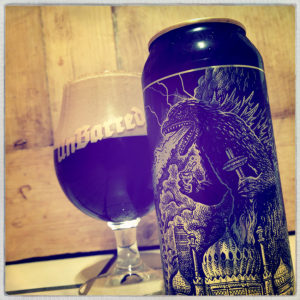 Stoutzilla ’20 (10%) is UnBarred’s yearly hit of Imperial fun.
It’s a massive Stout that has slowly changed over the years that it has been brewed, and will continue to do so.
This incarnation includes Bourbon and Madagascan vanilla, fresh coffee from Pharmacie and cocoa nibs.
It’s a great big sexy hug of a beer.
Pouring an inky black with a big cappuccino head, the aroma is heavy with dark chocolate, honey and molasses, and as soon as you take your first sip you know you’re in for a long boozy ride into beery oblivion.
The malting is fathoms deep, with digestive biscuits, bitter dark chocolate, rich honeycomb, Belgian waffles and walnut cake working as a tag team and leaving you feeling warm and cosy and loved.
The hopping brings the crackle of autumnal leaf litter, a dab of orange marmalade and a big sticky spoonful of Maple syrup, while the addition of vanilla, bourbon and cocoa make the beer feel smooth, creamy and ever so sensual.
It’s a big warm sensuous beer with a long creamy finish that will leave you wanting another even though you know you can’t stand up to get it.
Super stuff.