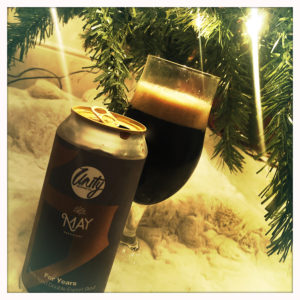 Unity’s Fourth Anniversary Brew is a Barrel Aged Imperial Stout brewed in collaboration with May Provisions.
Brewed with a Belgian yeast and aged for nine months in Bourbon barrels, this is a fine way to celebrate a birthday.
The aroma is big and bold, with rum and raisin chocolate, prunes and honey leading you down into a beer with a big thick treacle tart body.
Lashings of molasses and toffee, toasted brown bread crusts, honey and caramel form the heart of the beer, while the hops have turned red and crunchy with their time spent hibernating.
Maple syrup and pencil shavings, rolling tobacco and lemon curd provide a little sticky brightness, while the barrel ageing brings out lots of damp wood flavours, a rich vanilla smoothness and the tang of Bourbon boozy heat.
Happy birthday Unity, and long may you brew.