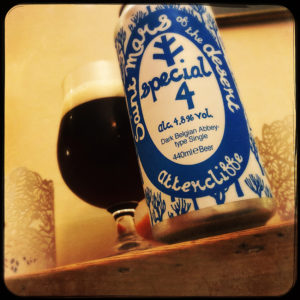 Special 4 (4.8%) is a Dark Belgian Abbey Type Single that’s soft and easy drinking.
It pours a conker brown and smells of toffee and tamarind.
This is a malty beer, but without the weight of a Porter or a Stout, instead the treacle tart and damsons, prunes, chocolate and honey are subtle and light, just the gentlest prickle of green and damp hedgerow and peppery watercress hops fading in and out as you work your way down the glass.
The yeast brings a waft of farmyards and silage, spiced toffee apples as you head towards the forest berry fruitiness of the finish. 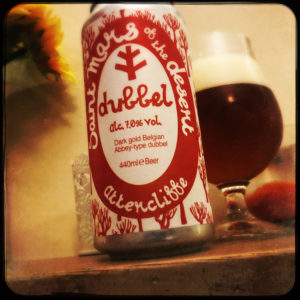 Dubbel (7%) needs no real introduction, I guess.
This is a Golden Belgian Abbey Style Dubbel that is sticky with honey and caramel, pancakes, brioche and biscuits. It’s a bright golden beer that is all about its matling.
Gloriously gloopy, there’s a hint of nutmeg at the edges, walnut bread and even some rich pumpernickel, while the hopping adds a snap of hedgerow undergrowth, dewy and fresh and green.
Then there’s the yeast doing its thing again, earthy and salty, and pushed along by a gently warm alcohol hit that rounds out the finish of this fine little beer. 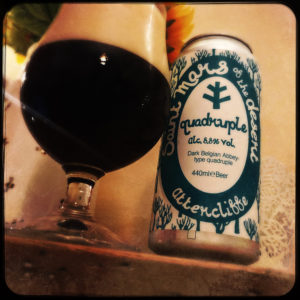 Quadruple (8.8%) hits the nail right on the head.
Lashings of spicy toffee apples, rum and raisin chocolate and brandy snaps create a sticky caramel and honey delight.
The aroma mixes freshly kneaded bread dough and spicy tamarind, while the beer sits a ruby red in the glass.
There’s a really fresh hit of a herbal greenery, hazel leaves, damp bracken and woodland undergrowth from the hops, that also slap you with a little hit of zesty lemon while the yeast is warm and round and earthy, but in the end this beer is all about its rich liquorice root, treacle and warm rum boozy heat.
Absolutely superb.