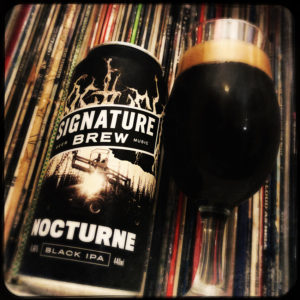 I’ve not had a Black IPA in ages, and to be honest I’d forgotten how good they can be.
Nocturne uses hops from Yakima Chief to create a beer that is dark and luxurious, with a thick treacle tart, bitter chocolate, coffee, prune juice and honey coated biscuit malt body, coupled with a hit of hops that brings lots and lots of orange peel, Parma Violet sweeties, lemon zest and lime curd.
There are acres of nettle filled fields to wander through while chewing a stick of liquorice root, the boozy hit of white rum warming you to your boots while you explore green herbal undergrowth.
But what stands out more than anything, and it is a really rather delightful thing, is the flavour of orange and mandarin skins.
It’s a bright, citrus oil flavour and it makes this beer sing.
Lovely stuff.