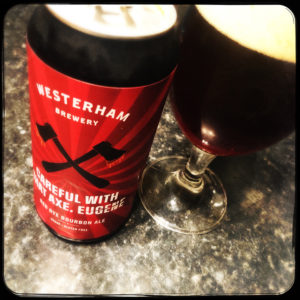 I like this Red Rye Bourbon Ale quite a lot, but then I’m still a sucker for a Rye beer.
Pouring a Ruby red with a fluffy head, the aroma is toffee, coconut and whisky, it’s a warm and inviting smell that draws you in.
This is a beer heavy with malting, rich and thick and gloopy, you’ll find treacle tart and honey on toast, brown sugar and doughnuts, along with an earthy, almost meaty, pumpernickel from the rye.
The hopping is sharp and zesty, with lemon skins and hedgerow leaves, while the addition of natural whisky flavouring and Madagascan vanilla brings a creamy warmth to the beer’s finish.